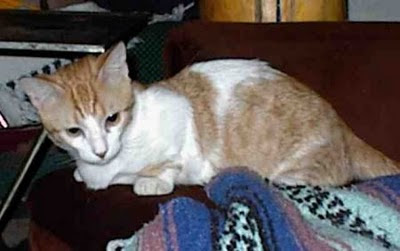 The Munchkin is a cat breed created by a naturally occurring genetic mutation that results in cats with abnormally short legs. However, the shortness of their legs does not seem to interfere with their running and leaping abilities. The gene responsible has been compared to the one that give Welsh Corgis, Basset Hounds and Dachshunds their short stature; however, Munchkins do not suffer from the many spinal problems that are typically associated with those canine breeds as cats' spines are physically different from dogs'. The spine of a Munchkin cat is usually indistinguishable from that of other cats. 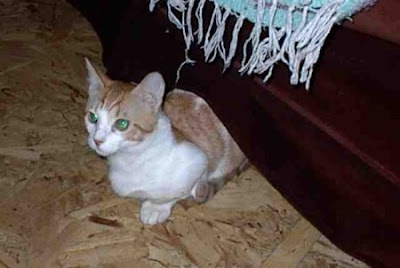 Finnegan was a great little Munchkin.

During the first few years of his life he lived indoors with our other cat and a 'gaggle' of dogs. When he was about three years of age we moved into town and soon after my wife discovered her allergy to cats. Finnegan was forced to move outdoors and he adapted well to this change in lifestyle.

For the next ten years he was often seen walking around the lawn and occasionally venturing into the yards of the closest neighbors. He was always close-by and never strayed far from home. He used the deck off of our kitchen as his home base and was often found there lounging on the deck furniture and eating from his dish. In the winters he lived in a box on the deck lined with blankets and sealed from the wind with a front flap door that allowed him to come and go at will.

Over the years Finnegan was picked on by other cats and other animals in the area. He often suffered from cuts and scratches, but he seemed to always hold his own and never suffered too badly.

Sometime in the last week or two Finnegan was attacked badly and suffered two large bite wounds on either side of the back of his neck. We treated the wounds and kept an eye on him but it became apparent that other internal damage had occurred likely from a violent shaking during the neck bite.

A few evenings ago he decided he had experienced enough discomfort and he started to howl at 3 in the morning. I brought him inside, cleaned his wounds, gave him a bath, removed some matted fur and set him up with a kennel, litter box, fresh blankets, food, and water. Soon afterward he passed away while we were at work.

I miss you little buddy. 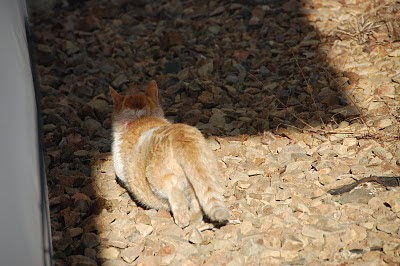