2022 UPDATE
The instructions below still work with no problems even though the software and Linux have had multiple updates. Also, if you happen to get your hands on a cheap Intel-based Apple iMac 20" from around 2007 it makes a PERFECT HamClock system as it's already an all-in-one PC, has full driver support from LinuxLite, and has a native display resolution of 1680x1050. Just a perfect resolution if you compile the software for 1600x960. 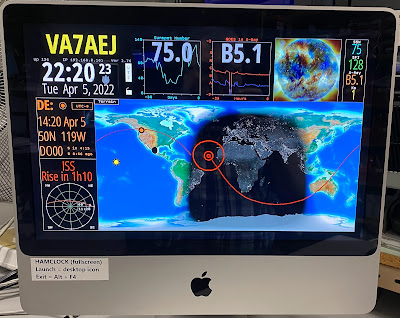 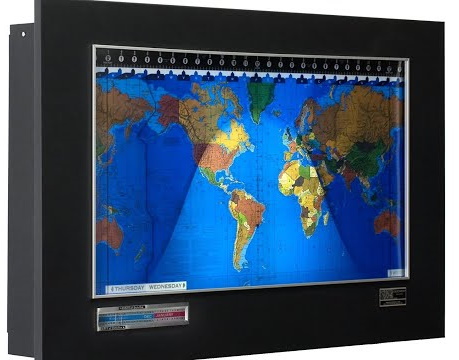 If you aren't familiar with GeoChron, this 50+-year-old companies product is a very complex analog electric wall clock that displays the world map and dynamically tracks the greyline (showing parts of the world in the dark of night, and parts of the world in the light of day). These expensive clocks are still popular items in the boardrooms or lobbies of multi-national corporations. Over 30,000 of these clocks have been produced in GeoChron's history. In recent years a digital version of the GeoChron is also available and it's intended to connect to a large 4K TV to show the traditional GeoChron dynamic map, as well as other cool data, live from the Internet.
Cut to an ARRL QST magazine article in 2017 from a fellow ham (WB0OEW) who created another internet-connected information software program for micro PC boards & touchscreen displays. His software 'Ham Clock' was focused on information that an amateur radio operator would appreciate like:
The Ham Clock software is now also available in a rebranded (HF Clock) a commercial product with an embedded microcomputer and touch screen display in your choice of nice wood desktop frame. Shop for this product on the manufacturer's website https://veritiumresearch.com/hf-clock/. So if you want to buy a product like a GeoChron or HF Clock, I've given you the basic information to research and order your own clock.

However many hams like the DIY part of the hobby and maybe don't want to purchase these unique clocks and amateur data systems, hence the reason for this post, building your own Ham Clock on the cheap using your own parts and pieces.
The original Ham Clock software from WB0OEW is still free to download from his website, he even includes instructions on various ways to compile the software for the Raspberry Pi and a 7" or 9" touch screen LCD or even on a desktop PC.
For my project, I wanted to utilize some equipment that I already had (ie a free project), and I also wanted a little more versatility out of the host device (the PC). I also preferred a larger screen easier to see from around the room. 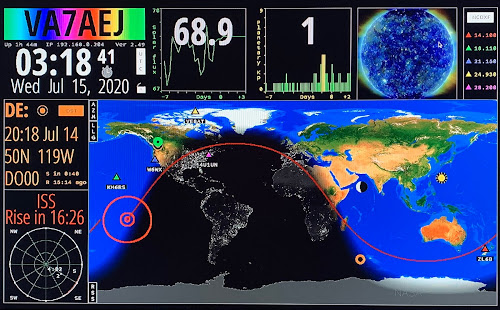 The first time Ham Clock launches it goes to a setup screen where you enter your callsign, your Lat and Long, or you can let the app geolocate with your internet connection (not always as accurate).
As Ham Clock was written for a touch display you can use a mouse to click on most parts of the screen and make changes. The Ham Clock User Guide is an easy read on understanding the initial setup and use of the software once installed and running.
So why didn't I just do this install on a Raspberry Pi and connect that to the TV? Well like I said I have other plans for this Linux Lite PC connected to that TV, so this method allows me to run Ham Clock when the PC is not in use for other purposes, but if I want to watch a movie or listen to some music I can close Ham Clock and fire up Kodi or Spotify etc.
on July 15, 2020

This is what I was wondering for! Nice information. Keep it up
UK VPS Hosting

Thanks for sharing such a useful information for us. we also offer UK VPS Hosting so if you interested visit this link

Great Article… I love to read your articles because your writing style is too good, it is very helpful for all of us and I never get bored while reading your article. Visit Linux VPS Hosting

I fired up your great Ham app on my Chromebook, in a Linux container under Debian Buster, and it works like a champ.

Next I will move it to my new ham shack, running on a Raspberry Pi 3+ plugged into a 50" Smart TV's HDMI connector. It's pretty on an 18" Chromebook - it'll be glorious on the big screen.