The Old Is New Again - My 2nd Station 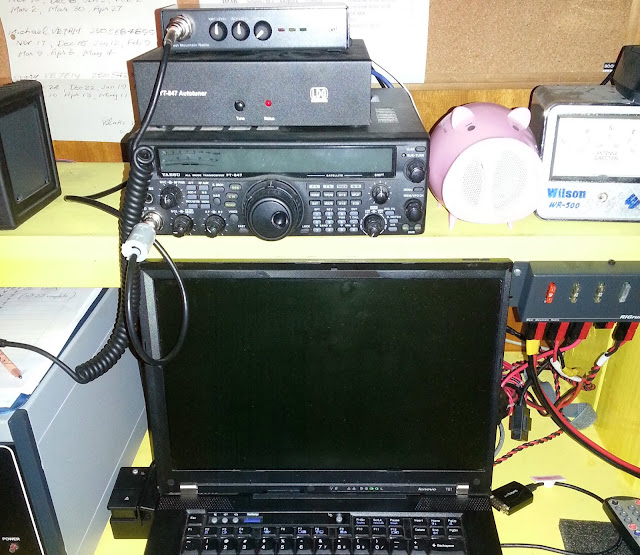 When I got into Amateur Radio a couple of years ago the first HF rig that I bought at a club auction was a Kenwood TS-120S. This old timer is still running fine, but it doesn't support the newer bells and whistles that I tend to find more useful in my radio experimentation. Next year the Kenwood will find a more permanent home in my 5th wheel trailer as a permanent mobile HF station.

The second radio I got was a Yaesu FT-847. This was a purchase that my dad helped me out with, and the key to the deal was one of my dad's friends and co-workers George VA7PRS/VA7COP who had the radio for sale.

The Yaesu was my "go to" rig for almost a year and it's all-band versatility and more modern features allowed me to experiment with a lot of different things in my first year as a licensed operator, VHF, UHF, HF, Auto Tuners, Rig Control, etc.

When I bought the Flex 5000a software defined radio the excitement of that led me away from the Yaesu for almost a year, once again the Flex was newer and cooler and there were things I needed to learn and expand my radio chops with.

At Field Day this year I spent a few hours chatting with Ron VA7VW who is heavily involved in Satellite and he opened up my interest in ISS, Amateur Radio Satellites, and the different uses for VHF and UHF that I hadn't even dabbled with yet. Ron helped the club earn a few extra points at Field Day by digipeating a message off the International Space Station. Needless to say I was impressed, it was all new to me.

So this long intro leads me back to the Yaesu FT-847 radio sitting on my bench doing little more then basic local VHF repeater work and net control operations for the last year.


HF+VHF+UHF ALL MODE TRANSCEIVER
The FT-847 Earth Station: A masterpiece of high-tech design and packaging know-how!
Utilizing the latest computer-aided design techniques and thousand of "chip" components. Yaesu's engineers have achieved an engineering breakthrough that was only a dream just a few years ago: a full-power transceiver covering HF, 50 MHz, 144 MHz, and 430 MHz bands in a package about 2/3 the size of an average briefcase. Ready for action on SSB, CW, AM, FM, and digital modes, the FT-847's ultra-compact size makes it ideal for serious base stations use, and well as a variety of portable and mobile applications, including Field Day, DX-peditions, VHF/UHF "Rove" operation, and RV installations. And long-term reliability is ensured by the rugged construction, featuring an aluminum diecast chassis which doubles as the power amplifiers’ heat sink.


The Yaesu has some serious chops in areas of Amateur Radio Satellite and Earth-Moon-Earth operation. I knew I needed to get it back up and running with more modes and versatility then just local VHF stuff. So another project began.

First, my laptop was getting old and starting to show signs of it's age. Rather then investing in a new one (not in the budget) I upgraded and added more memory (4GB) and switched to a used solid state drive I got from a friend (Intel 120GB SSD). These two changes really brought the old tech to life again. I also upgraded to Windows 7.

I wanted to build up a complete second station and this included a 2nd computer/laptop. My hope was that I could leave the first station with the Flex SDR alone and not confuse the setup by trying to get one computer to control both radios. I also hope that by going with a laptop I might be able to make the 2nd station portable sometime in the future for Field Day etc.

Next I experimented with a Signalink USB soundcard for the FT-847 and discovered I had a situation I needed to work around.  In a perfect world I want everything to be connected all the time, and be able to switch modes of operation without switching cables and plugs.

I have a LDG YT-847 auto tuner and it's just fantastic. The CAT/RS232 port on the back of the Yaesu wires into the YT-847 as part of the tuners requirement to control the radio for a few seconds during tuning. The YT-847 then has a pass thru CAT/RS232 port on the back of it to allow you to connect to a PC and still use radio control software like Ham Radio Deluxe. This double hop of CAT connections works just great and reliably.

Using the SignaLink soundcard for digital modes I didn't like having to plug and unplug the Mic every time I wanted to switch from voice to digital mode operation. I had to go this route because the CAT port on the back of the radio was already tied up with the auto tuner connections.

So I did some more research and ordered the RigBlaster Advantage soundcard because it has a Mic pass thru port that will allow the Mic to stay connected all the time as well as providing quick switching between voice and digital modes without cable swapping.

The RigBlaster also supports radio control and has a CAT/RS232 input on the back. The output of the RigBlaster to the PC is a single USB cable that carries the soundcard data and the CAT serial communication over the single wire connection. So with the previous solution I had a serial to USB converter cable running into the laptop for rig control, and I had another USB cable coming from the Signalink for audio. Now with the RigBlaster Advantage it will handle the digital modes function with the Mic pass thru admirably and all the CAT communication functions as well through a single USB cable solution into the laptop. 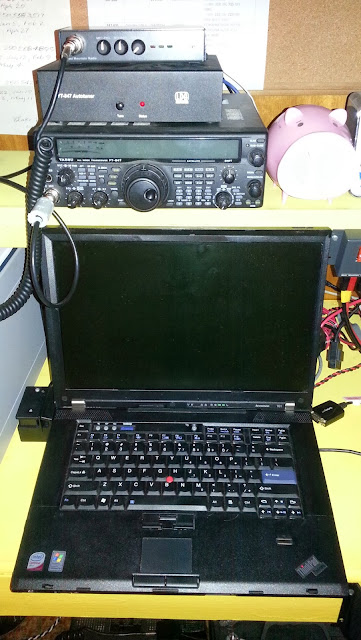 Time to start playing and experimenting  :)