I started to experiment with D-Star this past summer, it actually started with the purchase of a new truck.

In the spring of this year I purchased a used truck to replace my old 88' Sierra crew-cab that ran like a tank, but looked like a shipwreck. After I received the newer truck (2001) I started to have grand plans about radios, antennas, and all the possibilities.

After my birthday in July I took my gift cash and started shopping for a new mobile radio, D-Star enabled radios seemed to be wise investment since I was getting a fully functional analog FM radio (single or dual band), plus it would also be D-Star DV enabled on the same bands. More modes / more versatility

So after some shopping and stretching of the budget, I bought an Icom ID-880H. This is an analog FM dualband (VHF/UHF) radio that is also fully functional on D-Star's digital voice mode as well.

Throughout the summer I installed and enjoyed the new radio, but I don't have a D-Star repeater in my immediate vicinity. So my only opportunities to try D-Star came when travelling in the truck over longer distances to repeaters in other cities.

Before I get any further I should mention the following to all D-Star newbies.

Evolution #2 - An Even Cheaper Method Of Using D-Star

So even though I had caught the D-Star bug, I wasn't able to use it as often as I wanted. So with that in mind my second investment was in a DV Dongle from Internet Labs.

The DV Dongle is currently the entry point for D-Star. At $200 it's not even a radio, it's simply all the core electronics and digital decoder required to talk on D-Star over the Internet.

Because the D-Star systems are connected worldwide via the internet, the DV Dongle and your home PC or laptop can also make a D-Star connection over the Internet without the need of a radio. The only downside is that you are tethered to the Internet as your connection point.

There are plenty of more detailed and better produce instructions and videos on this entire process online. Please Google them and work through it step by step.

Evolution #3 - My Own D-Star HotSpot

So far I can use the DV Dongle on D-Star while sitting at my home PC.

And I can connect to D-Star while driving in the truck as long as I'm near repeaters in other neighboring cities and provinces.

But what about around my hometown, that's where I would get the most use out of any D-Star radio. Working in the yard, the shop, driving around my QTH, etc.

So while researching all the D-Star related gear and technology I kept hearing about HotSpot's, and that led me to the latest project.

To define a D-Star HotSpot, maybe I should start with a comparison...

At home, you likely have wireless internet. The wireless service is delivered to all your devices (computers, phones and tablets) via a wireless router or access point. These devices provide a bridge between your wireless devices, and the high speed wired internet delivered to your home. The output power of your wireless access point or router is not very strong, but it's strong enough to provide wifi to the area around your home. You may have also heard the term "HotSpot" used by businesses or restaurants when referring to free wifi connections at that location.

So let's say you have a D-Star radio, and no local D-Star repeater. Or, maybe there is a local repeater, but it's busy, and you would like to control the linking and unlinking of the repeater at your whim, but that would upset the others using it.

A D-Star HotSpot, is essentially your own private micro/mini repeater. It operates at low power (10 mW to 5 W), and has a range from maybe 50 meters to 5 kilometers (depending on structures, terrain, line of sight, etc).

Internet Labs, the company that makes the DV Dongle has a second product called a DVAP Dongle. This is a 10 mW hotspot USB device available in VHF or UHF models. When connected to your home PC, and running the software, you can now move freely around the house talking on D-Star from a handheld. This is the lowest power version of a hotspot, but it works well if you don't have far to travel.

A more powerful and DIY solution to a Hotspot is one that you build yourself from the following ingredients.

In my case I went with a Kenwood TM-V7A dualband mobile radio that I purchased used a couple years ago. It had a 9600 baud data port and was sitting on a shelf just waiting for this project to come along.

For a modem, I ordered a DVRPTR v1 from http://www.dvrptr.net/ This is an open source design assembled, tested and shipped worldwide from Montreal, Canada. $130

For a computer, I opted for a BeagleBoneBlack a low-cost, community-supported development platform for developers and hobbyists. Fitting inside of an Altoids tin, this tiny PC can boot Linux from a MicroSD card in under 10 seconds and is great for projects like this.

For software I went with the FreeStar software (another Canadian product) from VA3UV http://www.va3uv.com/freestar.htm. FREE STAR* is an experimental approach to the implementation of a vendor neutral, open source, digital communication network. Ramesh is a fantastic resource for support and an incredible evangelist for this product. I probably bounced 10 emails to him over the course of a week or two, and answered every one in a timely fashion with great advice. FreeStar can be configured to run as a full DV repeater, or a hotspot in either full duplex or simplex operation.

For an antenna, I already had a Comet dual band vertical on my tower and with a Comet triplexer I was able to connect the HotSpot to the UHF band of the antenna. The best part of this solution is that my VHF radio in the shack is also operating on the same antenna's VHF band thanks to the triplexer. 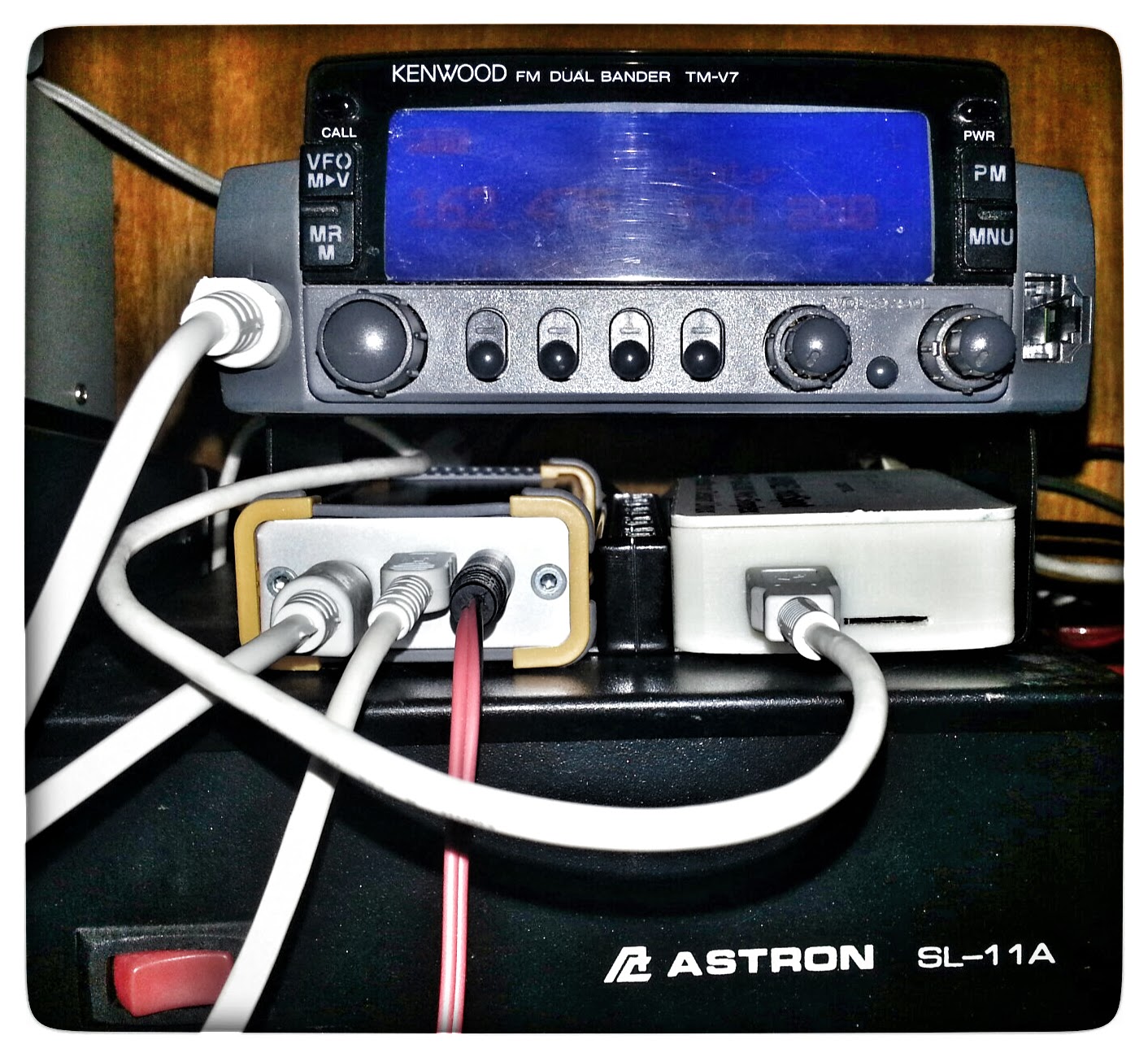 So after a week of building, testing and enjoying, I now have a 5w hot spot operational out of my QTH. I think I'm the only 'ham' in town playing with D-Star or even UHF, so the band is very quiet in my immediate area. I'm also located at the bottom of a small mountain valley area, so there are large hills on all sides keeping my signal from spreading too far in any direction causing interference with others. In the direction of the highway I commute on, I'm getting about 5km of range with good clean DV audio, I have linked and unlinked reflectors from as far away as 10km, but the audio is loaded with 'R2DR' noise till I'm at least 7km from home. I attribute the great reception to the great antenna up 40 feet on the tower outside of my home. Earlier tests with another antenna about 15ft off the ground had about half the range at the same power level.

I made my first contact with the hot spot on a Friday evening Canada wide net on the XRF005B reflector in Ontario. This week I've had multiple QSO's while driving to and from work with British, Irish, and American amateur radio operators on the REF001C 'mega' reflector.

D-Star is yet another Amateur Radio technology that combines radio communication and computing in new and exciting ways. I'm really enjoying it.