I have a yellow workbench/desk that I built years ago that wraps around two walls in my home office. When I decided to setup a ham shack I took out an old drafty patio door that I never used and framed in a wall where the door used to be. I then extended the workbench/desk around that corner of the room and extended it past the new wall.

Now I had bench that wrapped around 3 sides of the room and new ham shack section that I built a few months ago needed to be taken back outside and painted to match the rest of the finished bench.

The weather had finally gotten hot and dry enough and the propagation was miserable so I decided now was my chance. 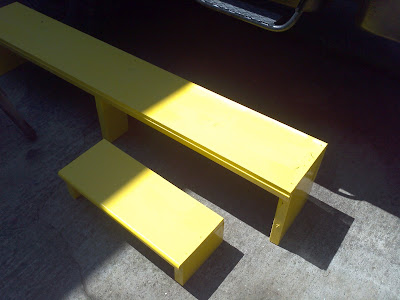 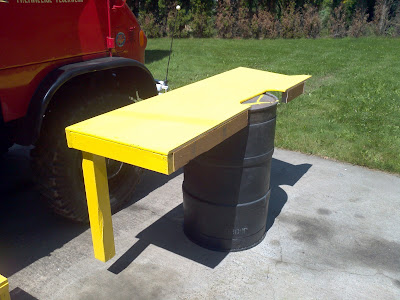 Between coats of yellow paint I went out to the shop and finished the shelve that I had started for above the bench. Once it was completed I stained it as well. 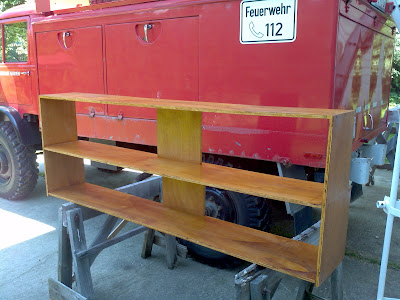 After both the desk and shelf were dry I moved them into the house and got them bolted into place. 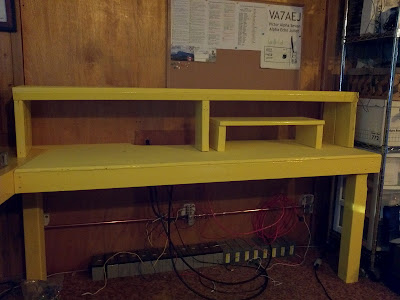 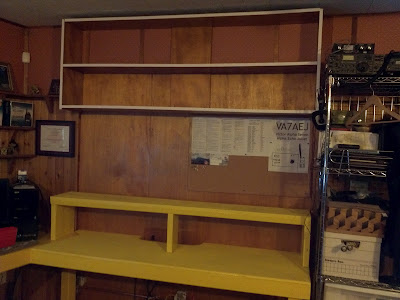 After another day to dry I finally got the shack all setup again last night and was back on the regional 80m net. 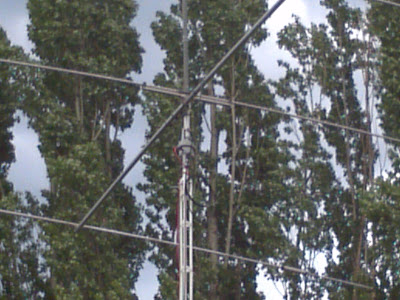 The new antenna is an older (exact age unknown) Mosely CL-33 triband yagi (20m, 15m, 10m). It came in pieces as the previous owner had disassembled it sometime ago.

Lucky for me the parts were all marked with either color coded paint or small marks made by the previous owner.

I used steel wool to clean off all the parts and cleared off my concrete patio to make room for the setup. With a fresh bottle of Noalox I started putting the elements back together and then the boom. Once the measurements were confirmed I start tightening all the bolts and I had an antenna ready for testing.

Thanks to Doug VE7VZ for making the trip out to Lumby and bringing his antenna analyzer along. It decided to rain at that exact moment but we soldiered forward and got it done.

I didn't have the rotator ready at this point so my first tests were just getting the antenna onto the tower and rotating it manually.

I also took my VHF/UHF antenna and put it onto a section of fiberglass pole and stuck it onto the very top of the tower. Once the tower is extended this is getting that antenna up an extra 15 feet or so from it's original mount and cleaning up the rooftop a bit.

It all started with an ad in the local ham clubs Swap and Shop. A local ham was moving and I purchased his old 40' crank-up tower, triband antenna, and a milk crate with two old rotators and 1/2 of a controller (it was in pieces).
After I sprayed a couple fresh coats of paint on the tower I let it cure in the back yard behind the workshop for a week. Weather was horrible (heavy rain) so it took some extra time to firm up.

Finally on a sunny day I grabbed my neighbor Gerald and we put up the tower. My house is two stories tall so the edge of the roof is just over 18 feet from the concrete pad below. 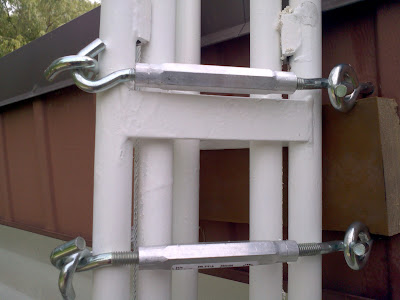 You can see from the hole in my siding that I removed an old patio door and framed it in. On the inside of my house this is the location of my Ham Shack desk. I built a cable pathway in the lower center of the new wall. The majority of the wall has traditional insulation but in the cable pathway it's solid foam insulation with removable plywood covers on the inside and outside. My intention was that as needed I could drill though the pathway and pass cables easily. After a few years if it's riddled with holes or I want to start again all I need to do is replace the plywood covers and the solid foam and it's all fresh again.