The Undead Walk The Earth 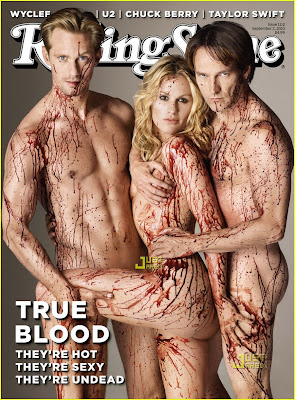 Thanks Rolling Stone Magazine for making True Blood even sexier than it already was. Wow, as we near the final episodes of this season the show has really ramped it up for the fans. It's weirder, scarier, sexier, and better than ever before.

Now, I have to wait till Halloween for the premier of The Walking Dead on AMC. If your not a fan The Walking Dead is a fantastic comic book series from Robert Kirkman. It follows the lives of a bunch of survivors of the zombie apocalypse. The main character Rick is a small-town sheriff who is injured in the line of duty and wakes up in the hospital a few weeks later to discover an entirely different world, everyone is gone, the dead walk the streets, and his wife and son are missing?

It's been a very popular comic series for about 7 years now and when AMC picked it up for a TV series fans like me went wild! The Walking Dead is extremely well written and it's much more of a character driven story than a zombie gore fest, although the zombies keep the adrenaline pumping. Watch this first look trailer for a sneak peak of AMC's next big series!