A software-defined radio system, or SDR, is a radio communication system where components that have been typically implemented in hardware (e.g. mixers, filters, amplifiers, modulators/demodulators, detectors, etc.) are instead implemented by means of software on a personal computer or embedded system.[1] While the concept of SDR is not new, the rapidly evolving capabilities of digital electronics render practical many processes which used to be only theoretically possible.

A basic SDR system may consist of a personal computer equipped with a sound card, or other analog-to-digital converter, preceded by some form of RF front end. Significant amounts of signal processing are handed over to the general-purpose processor, rather than being done in special-purpose hardware. Such a design produces a radio which can receive and transmit widely different radio protocols (sometimes referred to as waveforms) based solely on the software used. 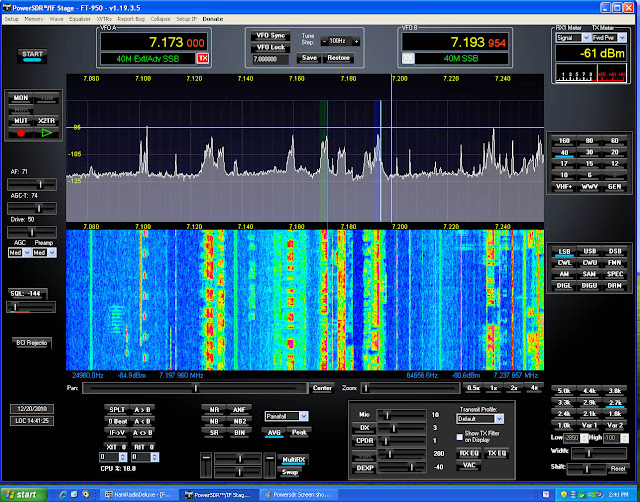 Now that I have a software defined radio (SDR) ordered and en-route I plan to document everything as much as possible for my own benefit, and possibly others who may stumble onto these pages.

As the description above states SDR is a new generation of radio where a large portion of the electronic hardware formerly embedded into a receiver or transceiver is built in software and run on a personal computer.

This is overly simplistic, but think of it as a traditional radio transceiver chopped in two.
The Advantages of a SDR?
The Cons of SDR?
on October 05, 2012