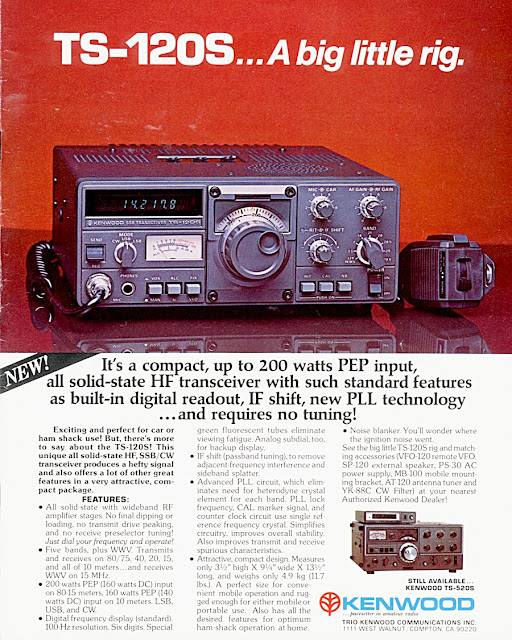 It's not a surprise that after a month of research and a previous blog post dedicated to my thoughts regarding purchasing my first rig, that I would ignore everything and purchase something on an impulse.

To be fair, I did so some research for a few days, read some reviews online, and consulted with a couple of "elmers" before my impulse purchase, but it was a deal worth pursuing.

I'm currently a member of two local ham clubs, one is in my immediate area, and the other is north from my home about an hours drive away. The club to the north is the one who hosted the license class that I took this fall and while it's a bit of a drive, these are the guys who taught me and helped me get my license, they are also the club that included a years club membership as part of the course.

It came up in the club that an older (30 yrs roughly) HF transceiver (Kenwood TS-120) and power supply (Kenwood AT-30) were coming up for silent auction at the next club meeting. Due to the age of the gear there wasn't a tone of interest, so I had a chance to get my first radio for a few hundred dollars. Everything worked and if you have to start learning and operating, you might as well start somewhere. I'm researching antenna's and antenna tuners now and hopefully I'll be on the HF bands within the next month.

Hello, my name is John I'm from Argentina, I also have my transceiver Kenwood TS 120 S, admire its publication published the kenwood and especially where contained "New!" consulted, you could purchase an antenna tuner and antenna to operate radio? I could not find the continuation of this story on this website, separates excuse. I send you a 73 dx s. LU2XAB'm from the Republic of Argentina